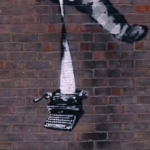 This week, my evening scribbles thread of bundled bookmarks (you can tell I’m still figuring out what to call these) is focused on art.

In tough times, I’ve said to my family, “We’ve got to write our way out of this.”

Whether writing privately to someone or in journals or publicly in blogs or “real” publications, writing is a core survival tool for finding an exit when every direction appears to be blocked.

Banksy’s latest public art installation reminded me of this – the power of writing your way out of trouble.

The mural is called “Create Escape: The Joy of Painting with Bob Ross & Banksy.” In it, we see a convict climbing down a prison wall on bed sheets tied together – but at the end of the rope, the sheets are revealed to be a white scroll extending upward from a typewriter.

Somehow the prisoner wrote his way out of jail – maybe it was a letter to the governor, a fantasy novel, or an autobiography.

I track public art via Beautyist.org, a project I started with my wife in 2004. We had just watched a documentary on PBS Thirteen about the Weather Underground and were so disgusted (still mourning what 9/11 did to New York City) that we wanted to contribute to a movement directly opposed to terror and violence – to make beauty.

We hope to sponsor installations and beautification campaigns, eventually. We need your help getting it going. Please tag your public art photos and videos with #Beautyist on Facebook, Twitter, and Instagram. (And more importantly, tag and name the artists

Before this week, I had never seen Bob Dylan’s visual art. It adds a new dimension to his music, whether he’s illustrating his lyrics or capturing Americana. I’ve been a fan since my teens, and you could say I went to New York for college because of Bob. He was a big influence on my songwriting, and back then, when I played the open mic at the Speakeasy on MacDougal, the emcee even used the end of my set as an occasion to plug their annual Bob Dylan impersonation night. So yes, it was mind-blowing to take the virtual tour of the Halcyon Gallery and see the world through Bob’s eyes.

Last, I’m admiring The Locker Room, an art collective in Brooklyn that brought 10 creators from different mediums to live together for a month (even during COVID). The effort is part of a larger campaign to advocate for the arts in New York City and chide those who have abandoned it during the pandemic. As their billboards in Miami and Los Angeles assert and plead: “New York is dead: Don’t come back.” To that, I add, long live New York. Check out Anna Rahmanan’s article in Brooklyn Magazine.

Thanks for being here. Keep making beauty.

This site uses Akismet to reduce spam. Learn how your comment data is processed.